This spring we made a proposal for new interiors and identity for a cafe at Amager Torv in central Copenhagen. The concept was a bit unusual: Tapas and Sushi combined  a quick snack-stop for the shopping tourists passing through Copenhagen's main shopping street 'strøget'.
The owner wanted to give the cafe an international touch and we therefore chose the spanish word 'mundo', which has an international feeling and as we all know tapas are from Spain. And the 'sushi' in the name of course relates to... sushi!  hence the name Sushimundo.
For the visual part of the logo we came up with a flower consisting of three fish. When repeated, the flower turns into a classy pattern which we used both graphically and for the interiors around the cafe.
The mood of the design is sophisticated with a touch of nightclub because the owner wanted to serve cocktails from a bar in the downstairs area. The logo font is a geometric sans serif (Twentieth Century), which we also used for headlines. For an extra touch of sophistication we used Adobe Caslon set in italic for the body text on the menu cards.
The identity colors are black, deep purple, bronze and dark brown. They are all combined with white to avoid a too dark and unwelcoming atmosphere.
The plans and proposal for interiors will be posted soon  meanwhile you can see the logo on the facade below... 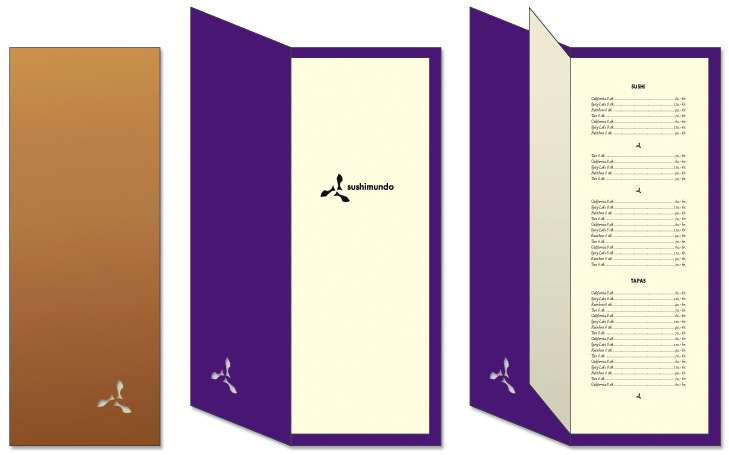